Harry Winston The Avenue Collection™ : a coming of age

The Avenue collection is celebrating its 20th anniversary, providing an opportunity to shine a light on this Art Deco icon. A series of designs as structured as they are resplendent pay tribute to New York’s Fifth Avenue, which inspired them.

Harry Winston takes us on a journey through time to New York’s legendary Fifth Avenue at the height of the Art Deco period. It was in 1932 that the American gemmologist, businessman and philanthropist Harry Winston established his first high jewellery Salon. A passion for exceptional stones and the boldness and creativity of the ‘King of Diamonds’ forged the house’s reputation. The first range of Harry Winston timepieces, released in 1989 and aptly named Premier, combined gem-setting expertise and watchmaking know-how. The three arches on either side of the Premier’s case were the signature of the collection, and evoked the façade of the legendary New York Salon. A decade later, the prestigious luxury thoroughfare where the brand originated inspired the design of a new collection named Avenue. Featuring rectangular cases and flowing, elegant lines, the collection also reflected this distinctive Art Deco style with its pure geometric lines, enhanced with diamonds, and its emblematic arches at 12 and 6 o’clock. To celebrate its 20th anniversary this year, this icon of femininity is exhibiting its very best finery.

Highly colourful and sparkling with baguette-cut diamonds, the new Avenue C™ Mini Moon Phase 20th Anniversary is presented as a refined trilogy. Each version, released as a limited series of 20 timepieces, has a gold dial haloed with white mother-of-pearl that combines geometrical compositions with precious stones. The gem-set, elongated oval shape gives it a dynamic appearance, with its precious stones in varying cuts, sizes and colours. White diamonds and coloured stones – blue or pink sapphires, aquamarines – form an elegant ensemble. Four hour-markers in faceted coloured mother-of-pearl stretch out around the emeraldshaped HW emblem and moon phase aperture. The earth’s satellite stands out against a midnight-blue sky. This subtle interplay of curves and straight lines is housed in a slim rectangular case in white gold. Set for the first time with baguette-cut diamonds, this precious receptacle evokes Art Deco architecture through the shape of the arches and diamonds. Worn with a matching light blue, pink or dark blue satin-brushed alligatorleather strap depending on the version, each creation counts the passing hours, minutes and phases of the moon and is powered by a premium Swiss-made quartz movement. 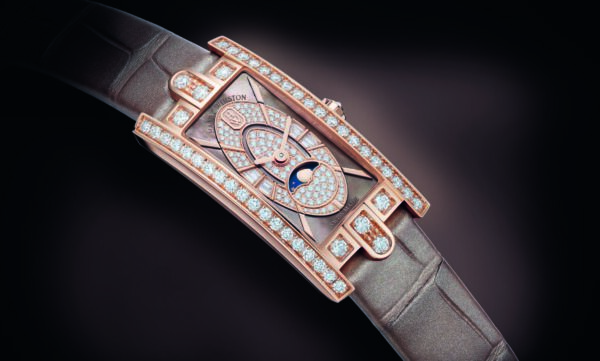 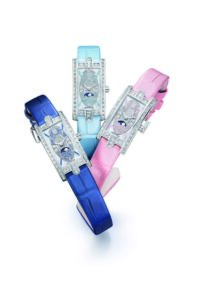 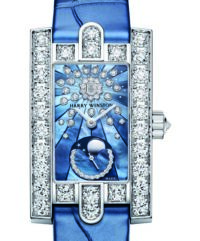 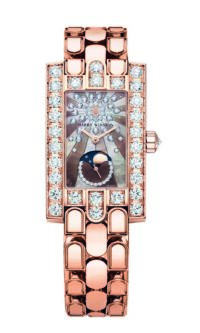 An icon of elegance

The highly refined new Avenue Classic Moon Phase also pays tribute to the house’s emblems. Its diamonds sparkling against an iridescent sky are in pure Harry Winston style. A fascinating sight to behold, cloud formations can be seen beneath a Havana-brown mist on the hand-painted motherof- pearl. Light and dark sunbeams radiate from the emerald-shaped HW emblem applique, which is proudly displayed at the top and centre, and highlighted by diamond-set ‘cluster’ patterns. A house signature, this technique developed by Mr Winston in the early 1940s made it possible to ‘free’ precious stones from traditional static settings.

Here, the HW emblem is surrounded by a star and streams of diamonds radiating outwards towards the central hours/minutes hands. At 6 o’clock, the phases of the moon progress across a night sky scattered with stars and topped by a small-seconds hand. The watch is powered by a premium Swiss-made quartz movement. The refinement continues onto the diamond-set rose gold case, which is embellished with the arch inspired by the Fifth Avenue Salon. Contoured for a better fit on the wrist, the Avenue Classic Moon Phase has an 18-carat rose gold bracelet. It is a creation that reflects the excellence of the famous ‘jeweller to the stars’. 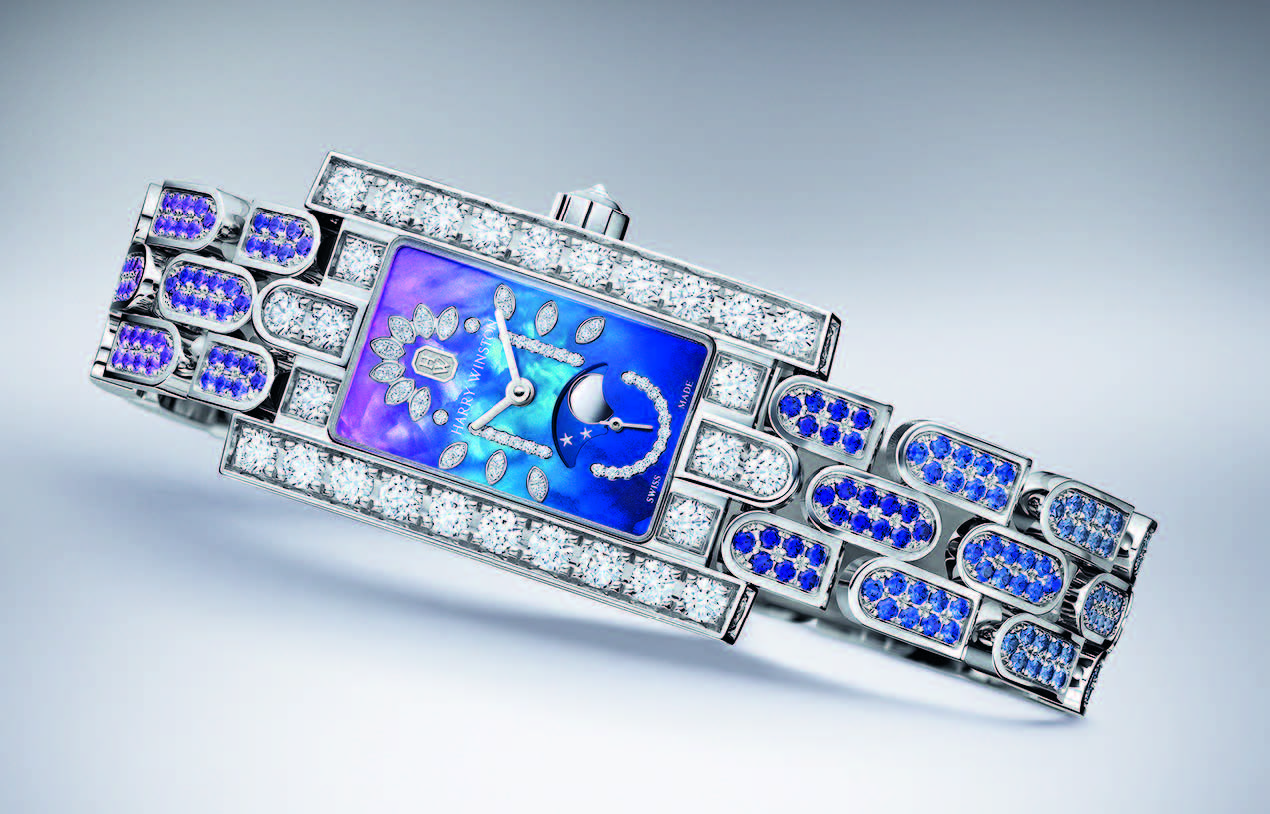 The Avenue collection is celebrating its passage into a new decade with a celestial creation. The hues on its dial evoke a radiant sunrise, which extends onto the bracelet set with colourful precious stones in graduated shades. Released as a limited series of 20 timepieces, the Avenue Classic 20th Anniversary Moon Phase comes in a rectangular white gold case set with diamonds and topped with the arches that characterise the Harry Winston Salon on Fifth Avenue. The phases of the moon are showcased on this anniversary model, shining brightly against a brilliant blue starry sky on a beaded mother-of-pearl dial that has been hand-painted in graduated shades ranging from dark blue to purple. Here too, eternal diamonds play the starring role as they glitter around the emerald-shaped HW emblem applique in marquise-shaped settings that recall the clustering technique. Lastly, the bracelet demonstrates the full extent of the house’s gem-setting expertise: pavé-set with 216 blue and purple sapphires and 66 diamonds, its shaped flexible links in white gold also recall the famous arches. Happy Birthday Ms Avenue !