Blancpain: an ode to classicism

A sanctum of elegance, far from the fads of fashion. With pure lines, understated dials and refined cases, the Villeret collection gives form to Blancpain’s vision of timeless watchmaking.

The origins of Blancpain hark back to 1735 and to the tiny village of Villeret in the Swiss Jura. In reference to the village’s long-standing watchmaking tradition, the manufacture presents the eponymous collection as its most classic, suffused with simplicity and elegance. Featuring rounded double-stepped bezels, legible, radiant dials, hands in the shape of cut-out sage leaves, golden Roman numerals and slim cases, Villeret timepieces reinterpret the aesthetics of the early 1980s. This year, as an extension of these emblematic design codes, Blancpain has added the new Villeret GMT Date, Villeret Ultraplate and Villeret Women Date to the collection. Their dials are white or opaline, and they are crafted from steel or red gold. Like all Blancpain movements, their mechanical hearts have been designed and made in the manufacture’s workshops.

In 1930, Blancpain presented the first automatic wristwatch for women. Then Betty Fiechter became owner and president of Blancpain – incidentally becoming the first woman to hold this position at a watchmaking firm – and redoubled the manufacture’s efforts to develop ladies’ watches. Today, the house pays tribute to its heritage in women’s watches with the Villeret Women Date, which also includes versions set with diamonds. The day of the month is displayed in an oval aperture (a first for the collection) incorporated into the hours ring, while the redesigned date numerals are rounder. Just like the other Villeret calibres, the 1151 movement is decorated with traditional finishes that include a guilloché honeycomb pattern on the oscillating weight. 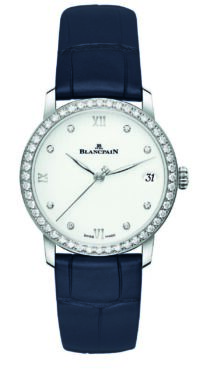 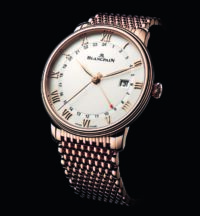 In another noteworthy development, Blancpain has slimmed down its Villeret Ultraplate model even further to offer a case that is just 7.4 mm thick. Based on the famous 1150 calibre, the manually wound 11A4B manufacture movement that drives it guarantees improved reliability and performance. The four-day power reserve is provided by two series-coupled barrels equipped with highperformance springs. This construction guarantees constant energy and therefore precision for as long as the watch is in use. To preserve the minimalist look of the dial, the power-reserve indicator is placed on the back of the watch.

The simplicity of a double time zone

Blancpain goes back to basics with the new Villeret GMT Date, which showcases a streamlined version of the double time zone with a simple calendar display. Powered by the automatic 5A50 calibre, the model is easy to read and use, with local time displayed in the foreground by a raised hours ring featuring applied Roman numerals characteristic of Villeret models. The reference hour is indicated by means of a 24-hour scale. The crown is used for rapid GMT correction and for setting the date and time. These two new Villeret models are secured on the wrist by an alligator-leather strap or matching ‘mille mailles’ bracelet crafted using a complex artisanal technique. Each bracelet is formed from 531 components assembled individually by hand, including 31 types of link that differ from each other by just several fractions of a millimetre. Invisibly connected, the links remain mobile. Lastly, the extremely delicate and meticulous polishing phase, undertaken in several stages, gives them a shimmering sparkle. Both supple and strong, the bracelet fits snugly around the wrist. 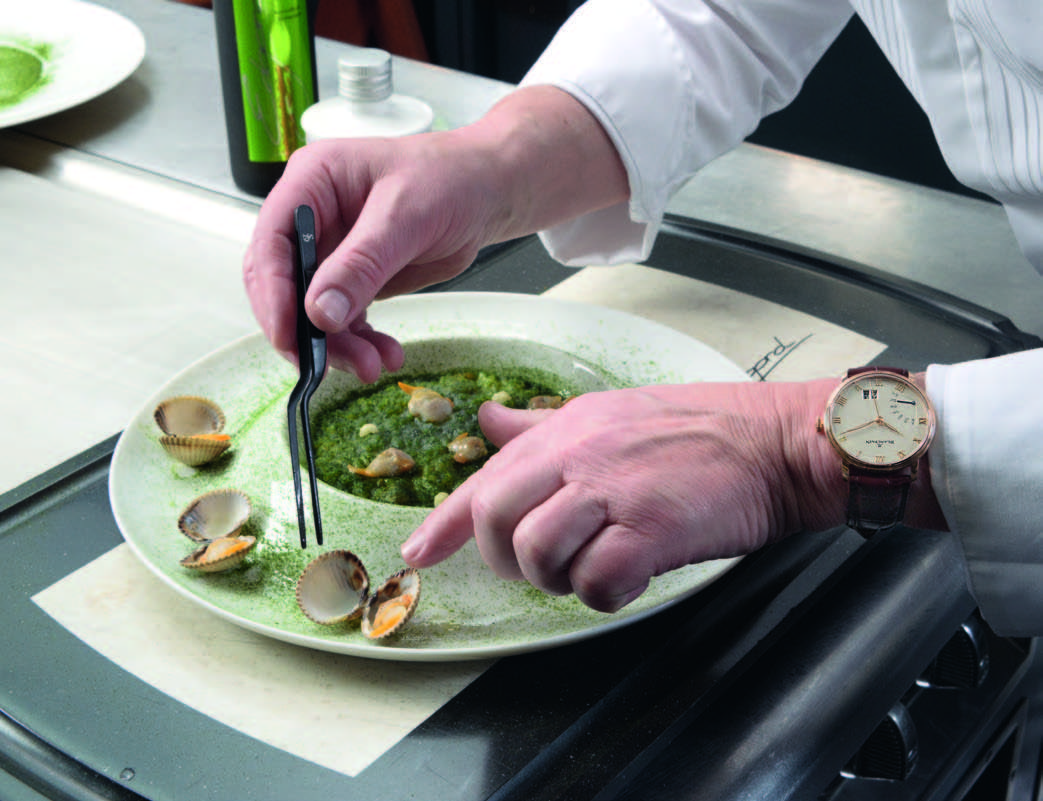 Watchmaking and the art of living: a shared tradition of excellence.

A taste for excellence

For over 30 years, Blancpain has enjoyed a special relationship with the world’s leading Michelin-starred chefs, and its partners include luxury hotels from the Relais & Châteaux and Leading Hotels of the World networks. These close ties were born from the conviction that the art of living, fine cuisine and traditional watchmaking share common values: the pursuit of excellence, passion, technical precision, expertise and meticulous craftsmanship performed by hand. Over the years, Blancpain’s circle of friends has grown to include leading names from the world of gastronomy, such as Edgard Bovier, Martín Berasategui and Holger Bodendorf. Recently, talented chef Julien Royer also joined the ranks. This young French chef’s career has led him from Auvergne to London via French Polynesia, before Singapore in 2008. Named after his grandmother Odette, the restaurant that he co-owns celebrates the memories inspired by family meals shared with loved ones. It took the top spot in a 2019 ranking of Asia’s 50 best restaurants.