Some good and some not-so-good news

2019 is set to be a successful year for Swiss watchmaking in monetary terms. And yet the number of watches exported continues to fall. Should we be worried about this? The only logical explanation seems to be that the lower market segment is slowly but surely losing its share to the smart watch industry. And as a result, average prices are constantly rising. Beyond the risk of seeing a drastic drop in volume in the long term, the outlook remains buoyant for the Swiss watchmaking industry, notably because of an insatiable demand from Asian consumers in general, and the Chinese in particular. But many challenges remain for Swiss watchmakers, not least the absolute necessity of enhancing its appeal to younger generations. Apart from an ever-increasing dependence on China, other faint signals should be seriously addressed. Starting with the fact that wealthy Chinese consumers continue to allocate ever-larger proportions of their budgets to intangible goods, and that, for this same clientele, luxury watches are no longer at the top of men’s wish lists. All the relevant facts and figures, presented here by Watches The Guide, will doubtlessly nourish reflections on these issues.

2018 was no exception to the rule: with a near 20% rise on the previous year, Hong Kong remains the largest market for Swiss watchmakers. This was, of course, before the months of protests and demonstrations that have incontestably curtailed trade in the former British colony. But despite this, Hong Kong spent more than CHF 3 billion on acquiring Swiss timepieces in 2018, outdistancing the CHF 2.2 billion spent in the United States, the Swiss watchmaking industry’s second largest market, which also saw an 8.2% rise in sales. By exporting the equivalent of 1.7 billion timepieces to China, i.e. 11.7% more than in the previous year, Switzerland maintains its three best customer bases (unchanged since 2011) in the same order. Up by 9.1%, Japan has taken fourth place in the rankings of the Swiss watchmaking industry’s best markets from the United Kingdom, which is down by 4.4%. In the first half of 2019, the uncertainty surrounding Brexit and the falling pound boosted Swiss watch exports to the United Kingdom, with prices becoming more attractive to visitors from abroad.

After a particularly dynamic first half in 2018 (+10.6%), Swiss watch exports amounted to CHF 21.2 billion last year, which represents an increase of 6.3% compared to the previous year. Despite a more moderate pace in the second half of the year (+2.3%), due notably to a slowdown in China, the good results in 2018 confirm the positive trend that began timidly in 2017, after the two-year slump of 2015 and 2016. The generally more

modest second half of the year did, however, allow the United States to record a marked increase (+8.2%) for the first time in three years. The Swiss watchmaking industry’s breakthrough in the United States contrasts with the situation in Europe (31% of market share), which fell by 2.9%. On the whole, Asia remained the favoured destination for Swiss watches totalling 53% of Swiss watch exports, thanks to a 12.2% rise on the previous year.

After a rather promising start to the year, with a 2.9% increase and CHF 5.1 billion recorded in the first three months, Swiss watch exports slowed down and saw a muted second quarter, with CHF 5.5 billion in exports. The Swiss watchmaking industry therefore registered slight growth of 1.4% in the first half of the year with sales representing CHF 10.6 billion. July and August were brisker, with growth of 4.3% and 1.5% respectively. After the first eight months, 2019 growth reached 1.9%. A recurring phenomenon: in August 2019, exports of watches sold at less than CHF 500 (export price) decreased by two digits (-15.9% in volume and -13.3% in value), making it the 11th consecutive month in which volumes fell. 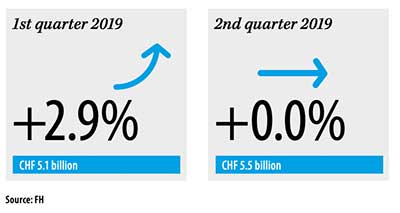 A vertiginous drop in the number of watches sold

This downturn is part of a very pronounced trend over the last 18 months that affects quartz watches in particular. It is thus easy to deduce that smart watches have well and truly grappled market share away from entry-level Swiss watches.

That being said, although the phenomenon has clearly gained momentum since summer 2018, Swiss watchmakers have been facing falling export volumes for more than 25 years. According to figures from the Federation of the Swiss Watch Industry, the watchmaking sector exported close to 43 million watches in 1993. At the time, watches costing less than CHF 200 (export price) represented 89% of volume, i.e. 38 million units. Since then, this share has continued to decrease, dropping to 80% in 1999, 70% in 2011 and 60% in 2018. At the start of 2019, it hit 55%. In other words, total volumes have decreased by almost half (-44%) in a quarter of a century, precipitated by the vertiginous decline of entry-level models (-62%). 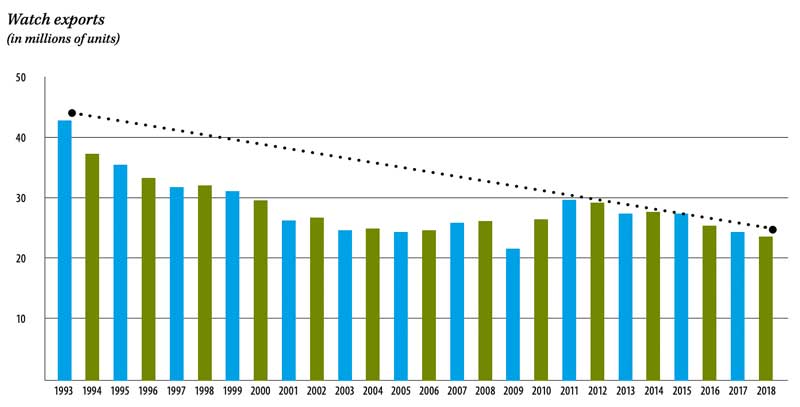 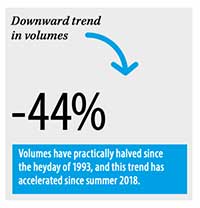 Market share: who has gained and who has lost?

Although 2018 failed to live up to the previous year in terms of market share (18.5% compared to 18.9%), the Swatch Group kept its position as the leading player on the worldwide watchmaking scene. Rolex, the second global player, progressed by 0.4 of a percentage point over the 12 months to achieve 14.5% of market share. The Richemont Group takes third place on the podium, stabilising at 13.5%, while the American firm Fossil and the LVMH group in fourth and fifth both lost market share in 2018. The first dropped from 5.9% to 5.1%, and the second from 5.3% to 5.1%. Japanese brands Citizen, Seiko and Casio together own almost 10% of the global market, while Patek Philippe remained stable at 3.3% and Audemars Piguet progressed to 2.7% (from 2.6%). 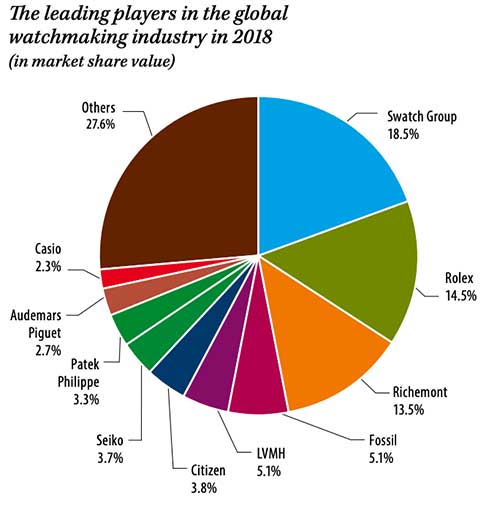 Switzerland and the others

In 2018, Switzerland confirmed its place at the top of the podium of players in the global watchmaking industry. Enjoying an upwards trend for the last two years, the Swiss watchmaking industry registered an increase of 6.3% last year, exporting the equivalent of US$ 21.6 billion. Far behind, Hong Kong came second with exports of US$ 8.5 billion. This represented slight growth of 1.8% (before the period of protests, as far as we know) for the former British colony, whose exports decreased the previous year. In 2018, China on the other hand saw a drop for the second consecutive year, recording an estimated US$ 4.8 billion worth of watch exports, i.e. a steep fall of 7.9% on the previous year. With watch exports remaining constant at US$ 3 billion (+0.4%), France kept its fourth place on the global watchmaking scene, followed by Germany which, despite experiencing a 2.7% drop, exported the equivalent of US$ 2 billion by the end of 2018. 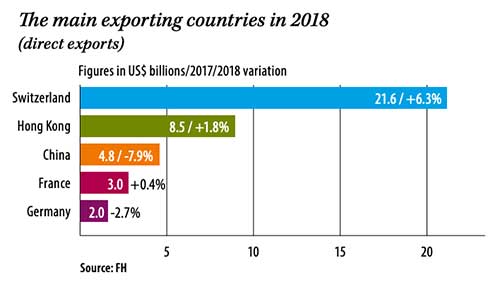 The word ‘watchmaking’ evokes contrasting realities, depending on whether it is analysed from a Swiss or Chinese perspective. The type of wristwatches exported and average prices vary radically depending on where they are made. The average price of an exported Swiss watch is therefore 280 times higher than that of a Chinese watch! In this respect, besides a drop in value, China also saw volumes fall in 2018. It exported 656.3 million watches, down 4.6% on 2017. The average price of these products was US$ 3, compared to US$ 4 the previous year. Timepieces in precious metals continued to see strong growth, while other materials fell in popularity. Fewer and fewer watches pass through Hong Kong, and 2018 was no exception. The region shipped or reshipped 204.7 million units, i.e. a 10.2% fall. The average price gained US$ 2 compared to 2017 to attain US$ 28. In third position, Switzerland exported 23.7 million watches (-2.3%), reaching its lowest level since 2009. The average price of these products increased to US$ 859 due to the slump in the entry-level segment. 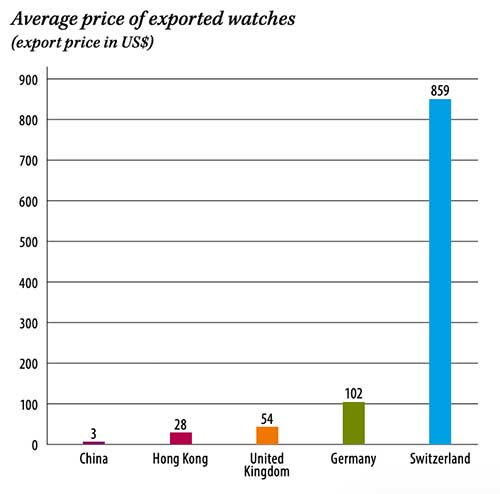 What is the outlook for the luxury market?

In its ‘Luxury Goods Worldwide Market Study’ carried out in collaboration with the Altagamma Foundation, Bain & Company has drawn up shortand medium-term predictions. The main lesson to learn is that growth rates for the personal luxury goods market are set to become more moderate than the euphoria provoked until recently by insatiable Chinese demand. Namely, for 2019, growth in the region of 4 to 6% (at constant exchange rates) is expected to generate between €271-276 billion (compared to €260 billion in 2018). Over the next five years, the consultancy firm foresees average annual growth of 3 to 5%, which would propel the personal luxury goods market to €320-365 billion by 2025.

“China continues to dominate the luxury scene,” explains Claudia D’Arpizio, a partner with Bain & Company and main author of the study. “Elsewhere, we are continuing to see geopolitical uncertainty shape and reshape tourism spending patterns, with Chinese consumers choosing to spend domestically more often. Overall we are seeing moderate growth in most markets.”

In concrete terms, Bain & Company confirms that China will continue to drive growth in 2019 with an expected increase of 18 to 20%. It is worth noting that domestic consumption has been greatly encouraged by various government measures and by price harmonisation. The other countries in South-East Asia, apart from Hong Kong and Macao, are not far behind, with growth in 2019 forecast at between 10 and 12%, supported by the emergence of a booming middle class in economies such as Indonesia, the Philippines and Vietnam. South Korea confirms its position as a roaring tiger economy. Even Japan’s growth appears to have returned to positive figures (+2 to 4%), driven by Chinese tourism and the upcoming 2020 Olympic Games. The trend is still positive in the Americas (+2 to 4%), although the trade war that has flared up between the United States and China creates a note of uncertainty, with a diminished flow of tourists from Asia as a result. It seems as if Europe will also manage to scrape by (+1 to 3%) in spite of the economic downturn on the horizon in Germany and the political upheaval generated by Brexit. The trend for the rest of the world is expected to be flat, notably in the Middle East, where domestic consumers are tending increasingly to spend abroad.

Judging by the figures for the first quarter, it is leather goods and jewellery that are maintaining the luxury markets in 2019, followed by beauty products. At the other end of the spectrum, Bain & Company notes the ‘hesitant recovery’ of the watchmaking industry, notably due to a very tense situation in Hong Kong, the main export market for Swiss firms.

These latest trends have been corroborated by another study conducted by the Hurun Research Institute, which examines the consumption patterns of wealthy Chinese consumers who have become less ostentatious in recent years and allocate an ever-larger proportion of their budgets to intangible goods. This is particularly worrying for watchmakers.

According to Hurun’s survey, cars, watches and bags have lost some of their appeal as status symbols. Published in early 2019, the ‘Hurun Chinese Luxury Consumer Survey’ revealed that the respondents, aged 35 on average, prefer to spend their money on tourism, education and healthcare, all of which are increasingly important new areas of expenditure. Furthermore, luxury watches are no longer at the top of men’s wish lists, where they have been replaced by electronic products. Cosmetics have seized first place as favourite gifts for women from jewellery, which is now in second place. Luxury watches are still, however, appreciated by collectors (almost half of wealthy Chinese consumers are collectors) before fine wines and jewellery.